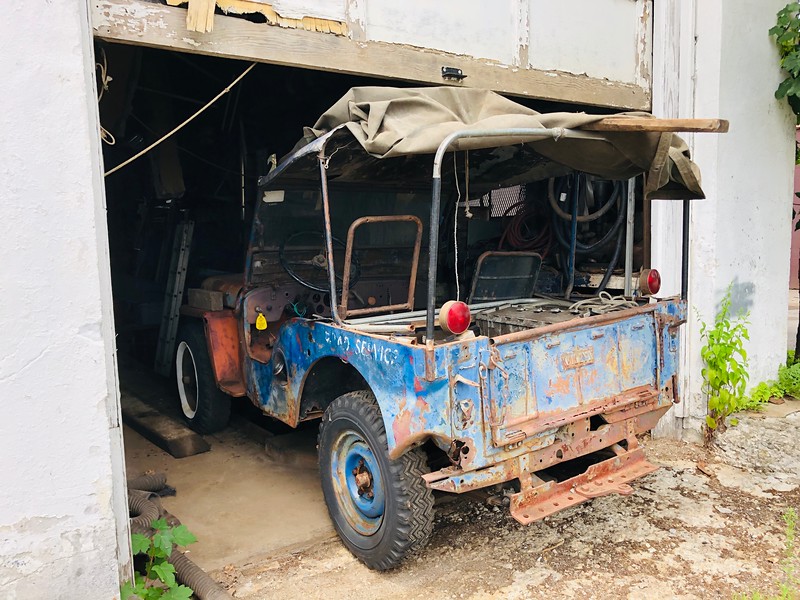 For the first time in seven years this Willys moved under its own power. All of the expected things needed attention to get to this point:

Aside from the weak batteries the engine starts and idles nicely. It sounds really good and ticks fine. The throttle sticks a bit though so when the engine is revved with the gas pedal the revs stay high. Some fiddling with the throttle linkage and hosing it down with PB Blaster smoothed everything out. Part of the linkage was bent which made the linkage stick. Easy to sort out.

With the engine running and able to restart without starting fluid I hopped in and moved it a foot in reverse. Victory!

One other issue were the brakes. When we towed the Willys ten years ago with a tow bar, the right front was stuck and it smoked badly. Turns out the left front was also frozen stuck. Rust had probably built up on the brake shoes and fused to the drum. Backing off the brakes from the drum is not very easy and requires some special tools. Once I was able to loosen up the brake adjusting cams the Willys moved a lot easier.

We then decided to move it from over the grease pit to the lift where we could raise it and remove the wheels. I hopped in the makeshift seat and fired it up. No brakes so I would have to creep along with my Dad walking beside ready to drop a wooden block if it started to run away from me.

It all went smoothly and I crept backwards out of Door B, coasted to a stop, and pulled into Door A over the lift. A big step!

On the lift we adjusted the brakes some more to get the wheels to move freely. The brakes still don't work but at least they won't be dragging. At least the Willys can be towed or moved easily now.

I may fiddle with the brakes a bit more while I have access to the lift. But the next step is to get it home!